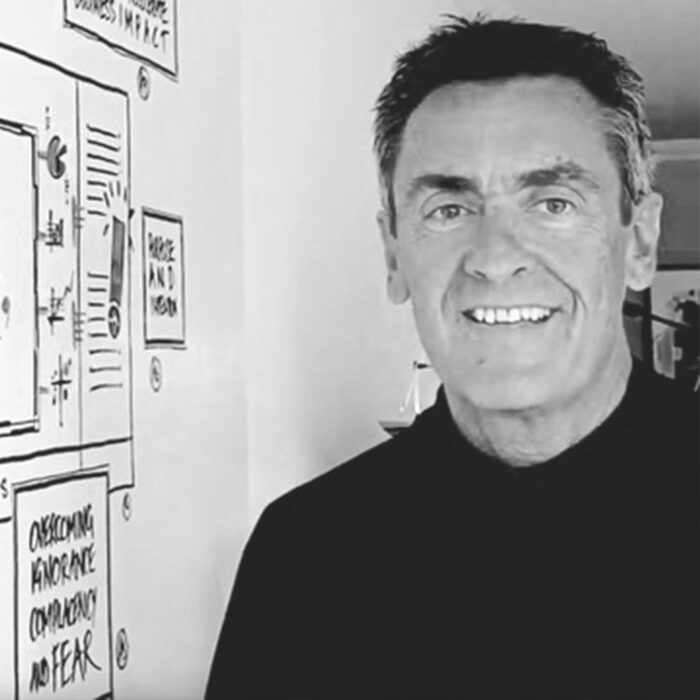 Being A Creative In A Strategic Industry

John Caswell created Group Partners as an antidote to the frustrations and missed opportunities of the leaders in the business world.

How To Make Strategies That Work with John Caswell

John Caswell is the founder of Group Partners, the home of structured visual thinking. Their aim? To help organisations make strategies that work and avoid solving the wrong problem really well.

The visual part is key and central to John’s work. He says the devil is not in the detail, it’s in the bigger picture, but it often hides in plain sight. Which makes it incredibly hard for business leaders, who are in the midst of their business creation, to see it.

John learned how important the detail was at an early age, from watching his father draw images of an aircraft engine. The pictures he drew were obviously of an aeroplane, but the level of detail his father went into drawing the engine, the thing that would power the aeroplane to fly, was mind blowing.

“It stuck with me all the time that you need to move away from the picture to see what it is. But it doesn’t mean that you don’t need the detail that sits behind it.”

Leaders of organisations have this incredible power machine that they have to understand in detail, but unless they step back and see the big picture, they miss the point.

Which is where John comes in.

The best way to have a vision

“Having a passion is part of businesses becoming what they are. But after a while they become machines. And these machines forget what gave birth to them in the first place.”

John works with the leaders who have forgotten what drove them in the first place. His job is to rekindle that thing that made the company brilliant in the beginning, or to help leaders do something that maybe they didn’t initially create, but that they have enormous stewardship for.

And problems arise because companies have to be more ethical, moral, sustainable and accountable to customers than ever before. This can create a disparity between what the vision initially was and what it has to be today.

John says if the first thing out of their mouths is sustainable profits, or increased margins, or market leadership he feels deflated. Because that’s not what the world needs more of. What the world needs is for companies to do and be better, to be more humane, to be authentic and have integrity.

The world is so dynamic and full of change that your strategy has to be one of perpetual reinvention, says John.

“But the problem with organisations is that they want low risk, so they build things that are permanent. But that’s not what the world is about. The minute they’ve installed these large processes and systems, they’re out of date.”

It’s not so much about developing new strategies for new processes, it’s about creating a strategy for changing mindsets.

“The challenge for organisations is to find people that have that mindset that allows them to be permanently prepared for whatever, no matter what’s going to come at them.”

Group Partners aren’t consultants. Consultants want to come into a company and their business model is to stick around, whereas Group Partners want to transfer capability of the profound idea of visualising something that’s maybe intangible, and then leaving them to carry it out.

A passion for problems

In a business context, every decision you make, while it may not be the only decision, it has to have quality. Which means organisations must make choices. And that equates to problem solving.

“I was in advertising and marketing and media for many years thinking that I was being creative, but I was never really that creative. Because that business is about making money. It’s not about making creativity.”

In order to be creative, John had to leave the creative industry. It’s only being in the strategic industry he’s been able to tap into his creativity, helping businesses solve problems.

And business leaders are increasingly bringing in people like John, not consultants, because they know they have to change, they have to move away from what made them great in the past, so they can become great in the future.

“We’re positioned very much not as a consultant. We’ve not got software in the back of our mind or augmenting a staff organisation with capability and people. We’re not that kind of business at all, we’re really in the problem solving area with leaders who need a coach or a mentor.”

But more importantly, leaders are realising they need conscientiousness, a higher degree of morality to succeed in the long term. Their customers are telling them they’ll leave if they don’t pay attention to the moral and ethical parts of their business.

What the world, businesses & leaders need

What does John think are long term solutions for business?

“Oh, easy, competitive disruption. I think if businesses want to stay around for the long term, they have to learn that it is always going to be about disruption.”

The rate of change is exponential. It always comes back to perpetual reinvention. Businesses need to teach employees how to be alive to everything, all the time, not just sit in their function, but to mess with it, disrupt it.

Education is broken, says John, as is the media.

“I think the media is obviously the whipping boy for an awful lot, but they are in a strong position to educate. And therefore, they are educating people to be consumers far too often, or political far too often.”

So what is John’s advice to leaders?

Get a coach or a mentor. Someone you trust who isn’t wedded to one industry or discipline. And don’t trust the grown ups. You have to believe in yourself, not take the advice of every well intentioned person who offers it up.

“Believe in your gut, believe in your instinct. In this world, it’s just as good sometimes to learn by mistake. You’re gonna make a mistake and you’ll get it wrong. But you’ve got to have that mindset.”

Leaders have to focus on decision quality and systems thinking. They need to focus on making things available visually and quickly. But essentially, they have to have the right mindset, otherwise it won’t work.

If the talk resonates with you, we’d recommend you listen to this episode too: The Power of Disruption with Whitney Johnson