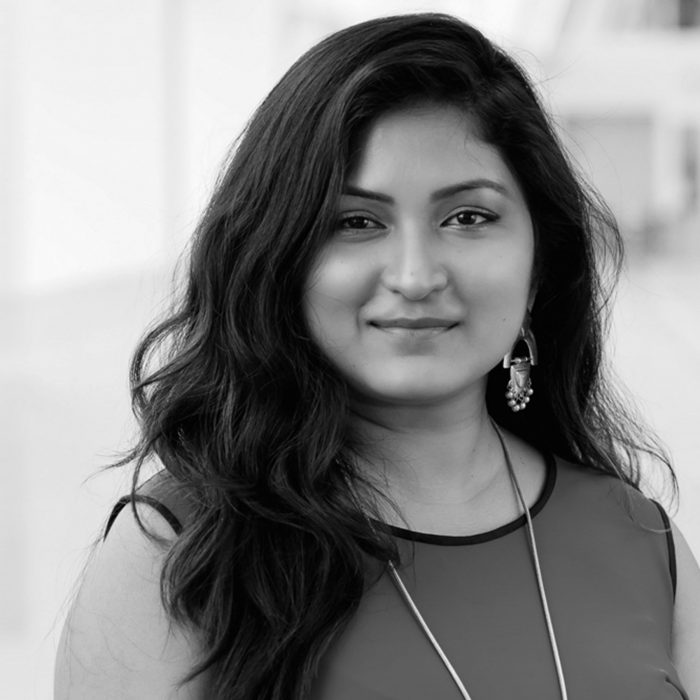 Staying Relevant in an Unpredictable Future

Sangbreeta Moitra is a voice of the millennial future. She’s a speaker, global strategist, and startup mentor, and she’s on a mission to make our future human-centric by transforming mindset and behaviors that trigger exponential change. Today Sangbreeta talks about making our future human-centric, change and transformation in organizations, being true to ourselves and surrounding ourselves with great people, sticking to solutions rather than titles or products, earning the role of leader, and prioritizing human connections.

Sangbreeta Moitra has an insatiable curiosity to understand people. She’s interested in who we are and how we are different, but most importantly how we are similar, because “what binds us together is so much stronger than what separates us.” “I’m fascinated by the human mind,” she says.

“My mission is to make our future truly human-centric.”

The degree to which we use and rely on technology now is going to affect our future in ways we cannot even imagine according to Sangbreeta. “How are we going to keep the human alive amidst all of this?”

Our careers and our jobs will change. Over the next ten years it’s estimated that more than 800 million jobs will be replaced by robots. These jobs might be gone, but the people will still be here. So what will happen to those 800 million people? What will they do? If you take away their job title from them, who are they and how can they create their niche and their relevance for the future?

Working with companies like Ernst & Young and Booking.com, Sangbreeta specializes in organizational change and transforming behaviors. “It’s such a massive global need at this time,” she says.

It’s not just a company changing its procedures. It’s 25,000 people changing the way they work. How are you as an organization going to make sure that every individual in your company embraces change from within?

A company is just a tribe of people working together with a common goal. Sangbreeta’s job is to go in and help the tribe embrace change and create strategies to help them overcome it successfully and make it long-lasting.

It’s about creating a process and an open company environment that is so truly motivating that people cannot help but be a part of the promise of the new company.

Sangbreeta also works on a personal level with people, helping leaders, entrepreneurs, employees stay ahead of the unpredictable future and still be relevant. “To me, success is being able to adapt to anything that comes your way and still be relevant,” she says. Change, innovative mindset, and transformation: that is the core of success.

Be true to yourself and surround yourself with great people

A wise person once said, “You are the average of the five people you surround yourself with.” It’s important to look around you and see who those five people are who are influencing you and shaping you subconsciously in ways you don’t even know.

Sangbreeta has been fortunate to have amazing mentors, friends, and collaborators in her life who have constantly pushed her out of her comfort zone. They saw a promise in her even when she didn’t see it in herself.

Sangbreeta calls 2016 her ‘Year of Failure,’ and it was another transformational element in her life. She was doing well in her corporate career, but she was also starting off her speaking and independent business.

When it came to establishing a business, she was looking at what other successful people were doing in her line of work. She thought it would work for her too, but she was so focused on being someone else that she forgot to be herself.

She was chasing opportunities that other people were doing, but she wasn’t trying to see opportunities that would truly fit her. She opened up her email one day to see five back-to-back rejections, and she had a bit of a melt down. Why wasn’t this working for her? Why couldn’t she get to the right clients?

She had to do a self intervention at the time, stop everything, and ask herself some tough questions. In the end, that’s when she realized that she was so focused on being a second rate version of someone else that she was forgetting to be a first rate version of herself.

She redid her entire business based on this experience, and everything changed. After that, she was invited to give a TEDx talk. One after the other, things started happening, and it’s still happening.

“The only time someone else can know your worth is when you know your own worth.”

Sticking to solutions, not titles or products

We can only hope to predict, but development is not always logical, and what becomes relevant to our future is not going to be as predictable as we think.

says Sangbreeta. “Stick to the solution and the vision that you want to bring that will bring a change or impact.”

The most important thing, for Sangbreeta, is always to be in tune with the needs of the people, not the products that you want to create. Products are replaceable. “As long as you’re serving needs, you will never be forgotten.”

Earning the role of leader

The landscape of companies and organizations is changing so much. Today, it’s no longer about massive organizations and the big hierarchical structure. It’s breaking up, and it’s changing.

Now, leaders aren’t just the CEOs and the chairmen of massive organizations. There’s also thought leadership, people who have beautiful visions. Many people across the world follow these leaders because they believe in their purpose and respect the things they’ve done.

In today’s day and age, it’s not just a job title to be a leader, you also have to earn the role of leader. You have to earn people’s support and trust. You do this by prioritizing the need that you’re serving and the change that you’re trying to bring.

Keep your intention extremely pure and extremely simple. The products and services we offer are a result and consequence of this core intention.

What the world needs most right now, according to Sangbreeta, is to truly prioritize the connection we have with each other.

It’s easy to like people who are like us, who believe in what we believe in, who do what we do. It’s difficult to be in the same tribe as people who think differently, but we need to build human connections with them.

It’s not about trying to force yourself to believe in what they believe in, but it’s about understanding the experiences that led them to who they are. Try to go to the root of why people think what they think and why they say what they say and have a real, honest, human discussion.

“I truly believe that so many tensions and frictions across the world can be relaxed when we stop reacting to what we are saying to each other,” says Sangbreeta.

“Always prioritize human connections,” she says, even with people you don’t agree with. If we try to understand each other on a very human level and are pure with our intentions, the conversations and insights we can gain have the potential to be wonderful and enriching.

If the talk resonates with you, we’d recommend you listen to this episode too: David Williams