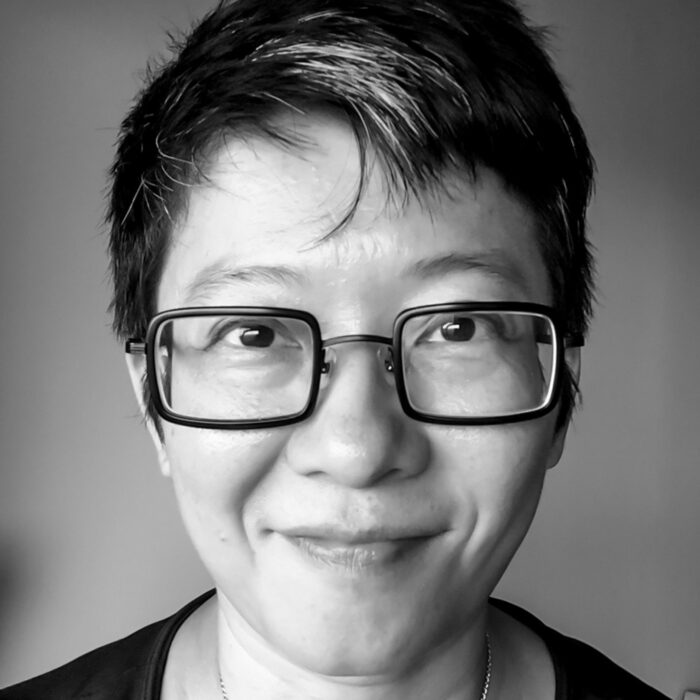 The Power of Visuals as a Sensemaking Device

How can art awaken people’s desire for change and support them in creating the future they wish for? Jayce Pei Yu Lee is a graphic facilitator and visual catalyst based in Taipei, Taiwan. Jayce is big at heart, small in size and organic in spirit. She is an artist, a scribe and a maverick storyteller through her whimsical brush marks. She is a core team member of The Value Web and of The Presencing Institute led by MIT professor Otto Scharmer. She also drives the visual practice movement in the Asia Pacific region.

Art is an application of human creativity, says Taipei based artist, Jayce Pei Yu Lee. It’s a way to expand the imagination and create new things.

With so much conflict happening in the world, and so many disagreements not just between people but between countries, we need art to create a space that allows new things to happen, says Jayce, without conflict.

“Everyday, every present something has possibilities, and I feel providing light is also providing a space to seek for new opportunities.”

Realising the power of marks

Jayce’s passion for creating marks stems from an early age, when her Grandfather taught her to look at a newspaper and repeat the words after him. For a young Jayce, these Mandarin Chinese symbols were mystical, but as she began to read, the rhythm and sound elicited a sense of curiosity in her.

Her father was an English teacher, a language he used to speak and teach. He would bring his material home with him, recalls Jayce, and one afternoon she was sitting beside him as he was writing English and she felt a similar connection to these marks that she had felt when she first encountered Mandarin.

“I saw he was drawing those marks, I was fascinated by those symbols, I started to mimic his writing, I was writing English. I didn’t know that’s English. But I knew those curvy marks, and those lines and the sense of freedom in those strokes.”

These two incidents embedded a lifelong love of drawing in Jayce’s DNA. She understood from an early age that she could draw on anything, paper, an iPad, and even if she just made a random mark, something would emerge that she could dig into and take her on a journey.

Jayce has always drawn, but when she entered the corporate world she laid down her pens. However she quickly realised that life wasn’t for her. She wanted to pursue something more innate with who she was. And then, 12 years ago, says Jayce, Kelvy Bird found her, and told her about a profession called graphic recording, or graphic facilitation.

“It was really eye opening. How can you listen to somebody’s conversation, and also draw at the same time and also make sense to the group? How did that happen? What was that mechanism?”

She became fascinated with making this intangible thing tangible.

“It was this term ‘scribing’ that landed in my heart, because that was the first word I heard. I witnessed what other people did, of course, what Kelvy does well, so to me, having something in my head and then making something invisible, visible.”

One of the most transformational moments of Jayce’s life was 12 years ago, at the end of a meeting with well experienced facilitators, Kelvy came up to Jayce and handed her a light green whiteboard marker.

“She saw me, like in a sea of people, she saw me and handed [a marker] to me. And in that moment I felt, wow, someone saw me. And then I was just doing something very small. But I was being seen. And recognition and encouragement became a seed inside of me that I didn’t know until years later.”

How to work with a graphic recorder

Graphic recording is an incredibly beneficial tool to facilitate and advance group conversation. But to get the most out of it, Jayce works closely with the facilitator before and during the meeting to find a good place and time for the group to come together, to pause and reflect on what has been discussed so far.

Jayce asks the group simple questions: what do you see? How do you feel? And what do you sense? With these types of questions, she says everyone can share what they see and feel collectively. These questions, says Jayce, help open up a layer of possibility for people to look at the meeting differently.

A company isn’t just a commercial space, it’s an establishment where business is conducted. But if you reshape how you think about company, what the word actually means, says Jayce, because company means to be with one another. It means companionship. It’s a space that provides friendship and joy.

So what do companies need most right now? They need to create a physical or virtual space that accommodates their people, even if they look different or have a different culture, or speak a different language. This space, says Jayce, is a safe place for everyone to speak up and speak out. A place where everyone can unleash their potential and just be creative.

All too often participants tell Jayce that they can’t draw. But she always challenges them, asking them to look back at their childhoods:

“We didn’t learn how to speak correct words, we learned by expressing ourselves and making marks. So I feel the gesture of making a mark in any situation is very critical. It takes courage. And it takes passion to do that.”

By the time people leave her sessions they feel like they’ve been nurtured, that a switch inside of them has been turned on.

“My very first time standing in front of a huge blank wall. I was literally frozen. I was looking at that big white space and asking myself, being really judgmental. It just came like a flash of a second: why am I here? I cannot draw, and all this critical self judgement came in.”

But then this voice in her head said, just do it. At that moment Jayce made a choice to draw. To trust herself to make a mark, any mark. She chose to be kind to herself.

“We have a saying in Chinese. It says whatever you don’t like to do yourself, you don’t give it to other people.”

Be kind to yourself and let go

Jayce’s advice to her younger self would be simple – be kind to yourself and let go, everything will be OK.

“There’s nothing that you cannot overcome. And there’s always meaning in why you are here. So remember why. And trust your instinct.”

Believe your doubt, says Jayce, because doubt is like a crack in your belief system. And if you reframe your crack as a challenge, not as a difficulty, but as an opportunity, those difficulties become possibilities.

“The Canadian poet and my favourite singer Leonard Cohen said, there’s a crack in everything. That’s how light gets in. So with the crack, recognise it, there’s a light behind it, follow that light, and chase that light.”

What companies need to focus on right now

With power comes responsibility. How can a company that is responsible for its own profit and growth, at the same time also care for anything else? That’s the key question, says Jayce.

“We are in this very challenging time, everything is so volatile, and with so much uncertainty, and with that complexity. Each one of us seeing we are part of the larger whole, with that mindset is very critical right now. So systems thinking, to think in a systematic way. It’s very important.”

The world needs us to be less human centric, and have a more planetary centric mindset. Because humans are only one of millions of species on Earth.

“We all have to work together on this, we all have strengths, and also weaknesses. And I feel the world needs right now [for us] to be less power centric and more kindness centric.”

If the talk resonates with you, we’d recommend you listen to this episode too: Otto Scharmer