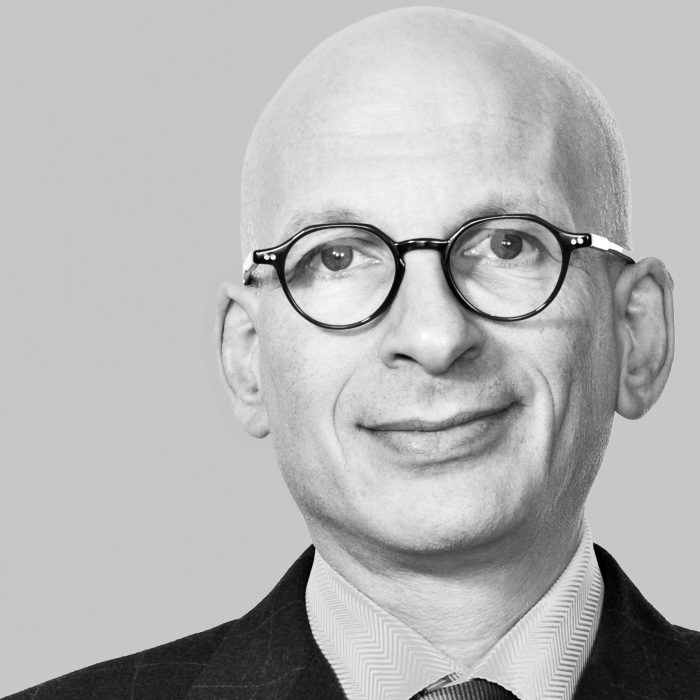 Failing More Often in the Service of Generosity

Seth Godin is an entrepreneur, best-selling author and speaker, and owner of one of the most popular and influential blogs in the world. Today he talks about dancing with fear, why there is no such thing as authenticity, what makes someone remarkable, the old way of doing education and his antidote to it, unlimited resources and possibilities, the difference between leadership and management, and what to ask ourselves more often.

When you see things, you have to be able to explain them. It’s not interesting to write about something you don’t understand. When Seth sees something in the world that he didn’t expect and that he didn’t immediately understand, he becomes curious and tries to understand it. Then he’ll write about it. He is not here to tell people shocking things, he’s here to help everyone see things that are right in front of them that they didn’t bother to notice before.

We’ve been around for millions of years, and we evolved to get where we are. You don’t pass on your genes if you’re foolish. Deep within every creature there is this inherent fear: of the unknown, of things we can’t trust, and so on. But now our culture rewards people who do things that other people are afraid of. It causes us stress, but if we embrace the fear, we can achieve truly great things.

“The two things that help us dance with fear are trust and belief.”

Trust because if you think that people have your back, it’s way easier. Belief because it is the bridge between us and the future, the path to get from where we are now to where we want to be. We can use trust to create belief and vice versa. This cycle helps us move forward.

Why authenticity is not a thing

Seth doesn’t go to meetings and he doesn’t watch TV. He intentionally makes his days emptier in order to create time for creative work. This emptiness allows for things that are actually valuable to fit in.

He doesn’t think that there is such a thing as authenticity. You do things on purpose, you don’t just do what you feel like doing. You do things with intent. Everything we are doing that’s effective has a who (Who are we trying to influence?) and a what (What change are we trying to make?). We don’t want an authentic surgeon or lawyer, we want a professional. A professional is consistent in bringing emotional labor where it belongs. It’s all about deciding what you stand for and doing that even when you don’t feel like it.

A remarkable person is someone that’s worth talking about. Remarkable is not gimmicky, and it doesn’t mean causing a commotion. People would want to talk about you because it would help them feel like an insider. If you manage to create an opportunity for people to benefit from talking about you, they will talk about you.

A fresh way of doing education

One of the areas that Seth is most passionate about is education. He wrote a free book on the object, called Stop Stealing Dreams. Why is education such a mess nowadays? For Seth, the reason is that 30 years ago we stopped asking what education was for. What it used to be for was to teach kids to put up with bureaucracy, to be compliant, to color inside the lines, and then to patiently do a boring job for 40 years.

Nowadays we don’t need these things anymore, but we still have the same schools. When we look at people we admire, people who are creating change, none of them were good at school. There is a misalignment here. We have to begin by having parents and teachers say, “Let’s have a conversation about what this place is for”. If you don’t know what it’s for, how are you going to know if it’s doing a good job?

He realized that online education looked a lot like regular education. There are some videos, then there will be a test. You have to memorize a lot. But there isn’t a shortage of information. There is a shortage of change, of opportunity to shift gears and to see things differently. He took matters into his own hands and created altMBA, an online leadership workshop where they teach people that they can get more done than they ever thought.

Fail more often in the service of generosity

What he would advise teenagers is to understand that there is no correlation between good grades, success, and happiness. Get a degree, but put the minimum amount of effort into it. Then spend the rest of your time building something you care about. Some people say you should do what you’re passionate about, but for Seth, you should be passionate about what you do. Pick something and then choose to become passionate about it. Find the change that you’re making.

All doors are open and there isn’t a limit to resources. Anyone who wants to devote the time can build a following. We all have unlimited resources, and if we devoted three hours a day that we normally spend watching TV to building something generous, we could change things.

Seth has learned way more from the failures than from successes. Each one of these failures helped him see a different way forward. It’s also what he advises leaders: to fail more often in the service of generosity and to keep in mind that leadership and management are two different things. Management is telling people to do what they did yesterday, only faster and cheaper. Management should not make mistakes. Leadership, on the other hand, has to make mistakes. Leadership means you don’t know, you’re exploring. Too often leaders who have succeeded forget to keep exploring.

What to ask ourselves more often

Capitalism has a lot of negative side effects, but one of its positive side effects is that it forces governments to be a lot more rational. Industrialists don’t like it when the system breaks. What’s missing is a voice from people who care and who say, “We have to do something about economic equality, education, and the environment”. If we let these three things go in the wrong direction, nothing else will matter very much.

The idea that the job of the company is to maximize shareholder value is crazy. Companies exist because citizens allow them to. They are part of the culture they are in and they have to figure out how to matter to that culture: not to take from it, but to give.

So much of the noise in our culture has pushed us to be short-term thinkers. Seth wishes that people would ask themselves,

“What’s this for? This thing I’m spending time and money on, what’s it for?”

If we asked this question more often, we might get a better answer.